Home
Travelogues
A Day in Yehliu Geopark: Meet the Queen and Discover the Hidden Gems

A Day in Yehliu Geopark: Meet the Queen and Discover the Hidden Gems

Daycation with Kids in Yehliu Geopark

On a hot scorching summer day, I took my kids to one of the most visited tourist spots before the pandemic on the northern coast of Taiwan, the Yehliu Geopark. In fear of not seeing the world-famous Nefertiti-like “queen’s head” again for the rest of my life (Yes, she’s going to “break” her neck according to geologists), I certainly think the kids should take as many opportunities as possible to witness the geological wonder on this island nation.

For most of the visitors, they come and quickly take a picture with the Queen’s Head with excitement and, then, as you might know, leave without scrutinizing how thin her neck actually is. I think it’s either too hot to stay outside this long in summer or too cold to be eager to seek shelter in winter. Nature is cruel and the neck of the rock is believed to be broken in twenty years due to natural erosion!

On top of that, you can also see a giant sandal rock, a gorilla rock, tofu rocks, candle rocks, just to name a few, with a little imagination if you don’t stay up late the previous night. You’ll be greatly amazed by a variety of hilarious rock shapes in such a short distance of walking. No wonder this geological landscape can be ranked as one of the Top 10 incredible geological formations by the Alltime10s on YouTube and described as “the closest you’ll get to Mars on Earth” by CNN. 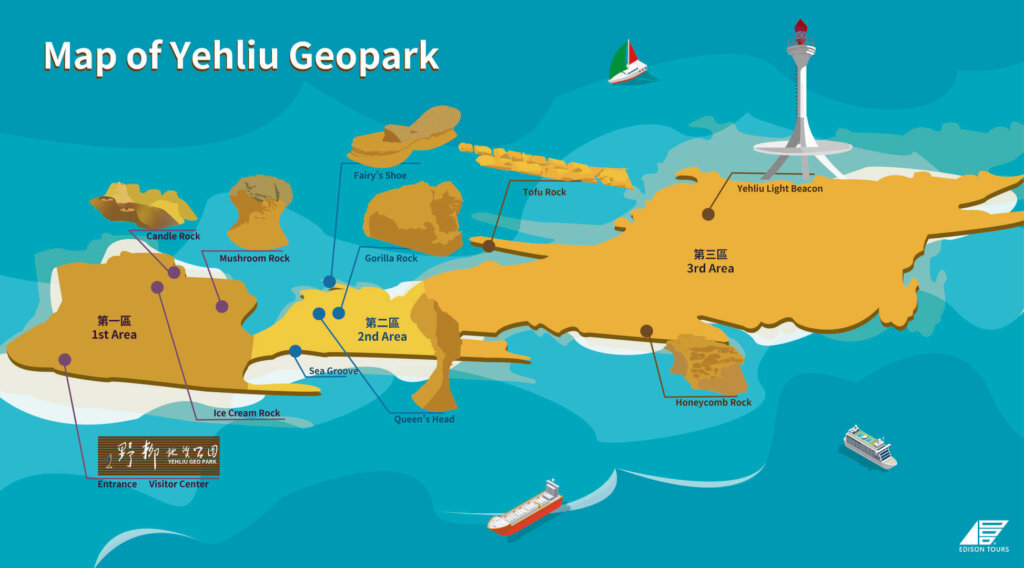 Today, I decided to do something different to avoid the hustle and bustle of popular Areas 1 and 2. Yes. I’ll keep walking down the well-paved trail until the cape’s end to see what actually happens there! The entire cape is systematically divided into three areas, and the nearest one to the entrance is numbered as the first one.

Luckily, staying on the main trail, the backbone of the cape, can simply make you find the access to all of them. Walking slowly in the fierce sun because of the blistering heat, we shockingly found the view along the main trail of Area 3 is not as good as I originally imagined. All we could see is a long stretch of “tofu” rocks to the west of the cape. In addition, the hot humid moist almost killed us, forcing an old father and two whining sons to find shades from time to time.

Yehliu, a place name tracing its root from Spanish “devil”, has the longest cape on the entire north shore of Formosa. The European navigators are said to have seen too many shipwrecks around this headland due to the roughness of the sea to give it this notorious appellation. In modern times, however, its narrow landform into the sea has been highly acclaimed by foreign media and Internet influencers alike thanks to a wide range of peculiar rock formations and breathtaking rugged coastline, let alone the precious fossils you can easily spot on the surface of the rocks.

We spent roughly half an hour walking on the higher ridge of the cape until we saw the structure of the light beacon, which is the highest point on the cape and almost a hundred meters above sea level. Not a mainstream area in the geopark, Area 3 has more insects than human beings. We found quite some beautiful paper kite butterflies, which are among the top choices at many school conservatories.

This area is, in fact, more of a nature haven than a tourist area. The view from the beacon is pretty much obstructed by surrounding vegetation so we left without staying for too long. One piece of extra information for you: if you keep walking down the trail for less than 10 minutes, you’ll get to a wonderful commanding height with a pavilion. This is a better place you’ll want to take out your packed lunch!

What if you really want to work out a bit more? This northernmost tip of the foreland should be your best destination if you’re more of a “view” person than a “rock” person. By the way, you don’t need a pair of Air Jordon sneakers to come here. A pair of sports sandals can do well, especially on a rainy day in winter. Oh! I have to do another article about the scenery here in winter. That’s a totally different story.

The Yehliu Geopark has been promoted as a piece of shining jewel on the “Crown Northern Coast”, as the government calls it. This is absolutely a stunning seaside destination you can always find something for yourself, rain or shine. For the avid walkers, you can easily, I believe, trek down the main footpath till the end of Area 3 in less than one hour to see, well, actually not much. Better to stay in Areas 1 and 2, which have always inspired awe among sightseers.

Adult: NT$120
Concessions: NT$60
*Seniors aged 65 and above (citizen of Taiwan)
*Children aged between 6 and 12
*Students (citizens of Taiwan and ISIC holders)
Group above 30 visitors: NT$96

How to get there?

From central Taipei, I’ll recommend to you the Kuo-Kuang 1815 bus service departing from Taipei Bus Station or Taipei City Hall Bus Station. If you happen to combine the riverside historical town of Tamsui with this, take the MRT to Tamsui (north) on the Red Line first and transfer to bus routes 862 and 716.

If you’re looking for a private tour to Yehliu Geopark and the northern coast of Taiwan, then you should definitely book with Edison Tours, which offers customized day tours that include round-trip transportation, a professional tour guide, entrance fees, etc. On the other hand, for solo travelers and small groups, you may opt for either a half-day tour or a full-day tour by availing the join-in tours.

Too hot in summer?

The Visitor Center has a cozy café inside selling beautiful ice cream with nice cold AC. If you don’t mind walking a bit out of the park entrance, there’s an 85C café right by the fishing port.

There is a 7-Eleven and FamilyMart respectively not far from the park entrance. If you’re good at haggling, there are a couple of seafood restaurants where you can buy something big like lobsters!

If you’re traveling with a big family, you might want to visit the adjacent Yehliu Ocean World with their famous dolphin shows to kill some time especially when it’s too hot for you to walk in the sun!